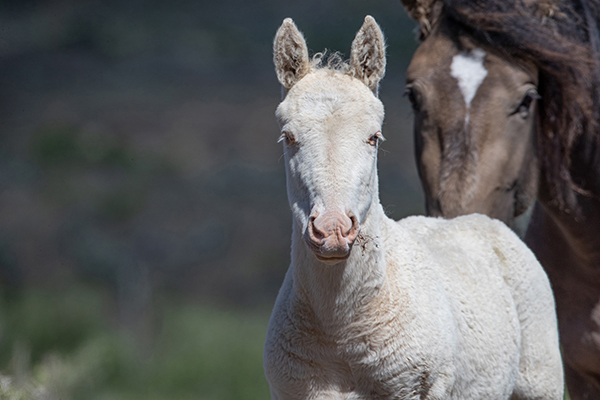 Julian and his mother Cassia

On a beautiful morning in May 2020, I was photographing family bands of wild horses as they left where they were drinking along a creek in Salt Wells Creek. They were moving to an open area where they would spread out and graze and nap. Suddenly I caught sight of a tiny cremello foal with a dark buckskin mare. As I walked slowly closer I could see the curly colt – a curly cremello! 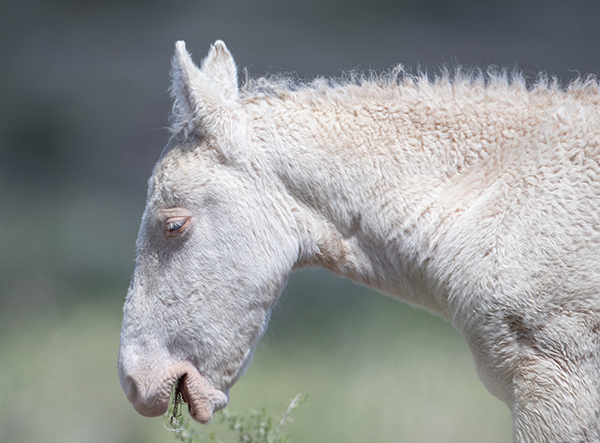 He had curls in his ears, curly mane, and a coat that looked like a little lamb. I was enchanted.

Between his mom and dad 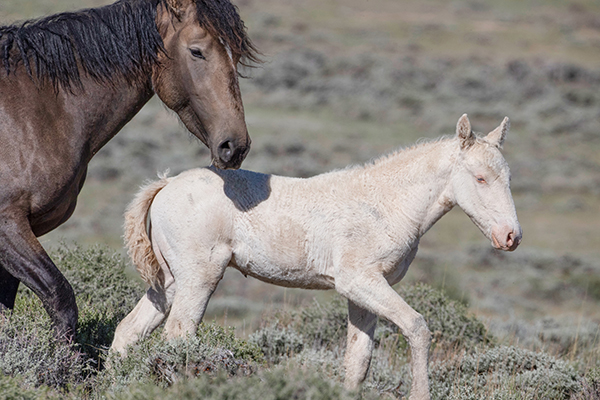 After that trip in May I did not see them again until I was back for an adoption in Rock Springs in February. They all had their winter coats. 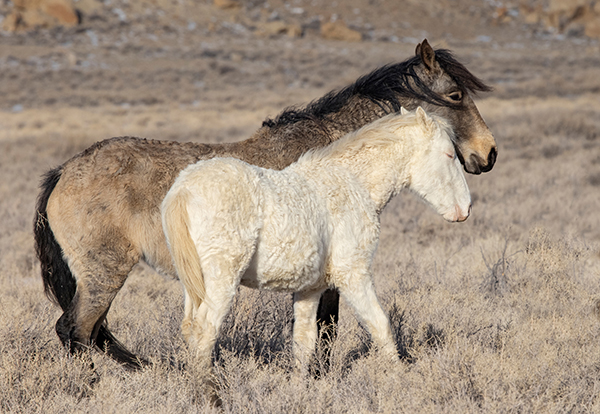 They were all together grazing near a few other family bands. 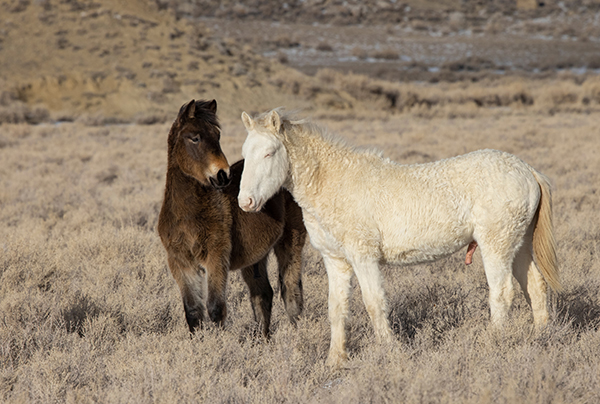 Julian and his brother 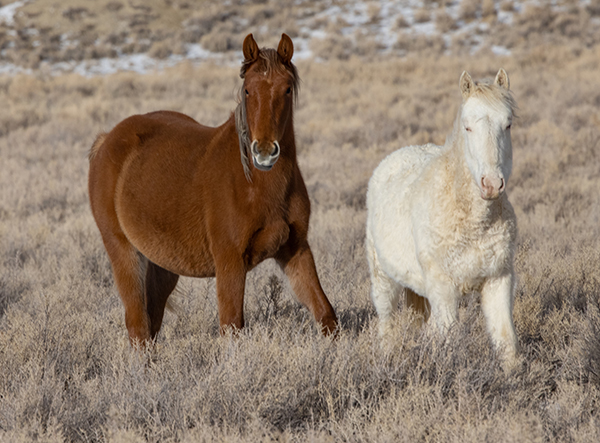 Julian and his dad

As spring turned into summer, I visited again and found them above a waterhole at a mineral lick. There was a new mare in the family with a little filly. 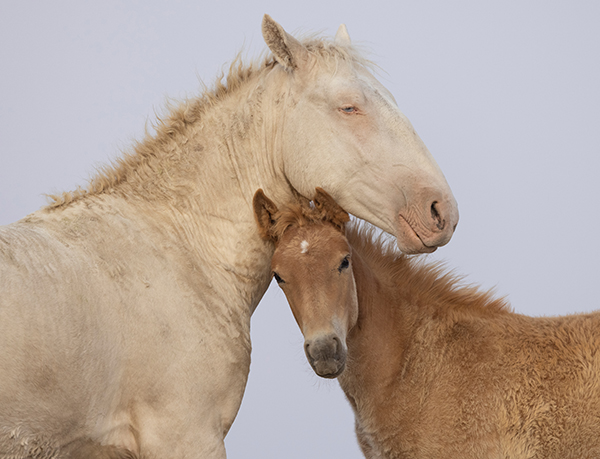 Julian and his little sister 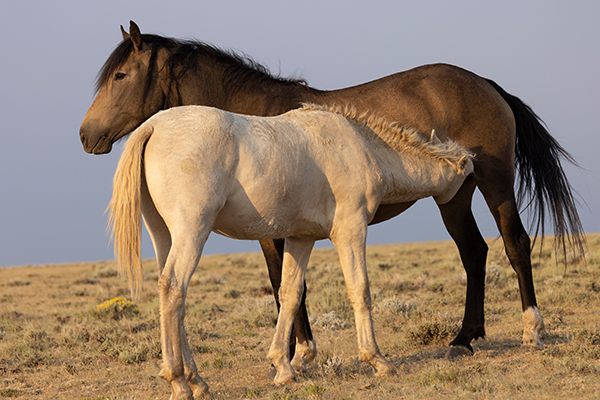 Julian is a yearling but looks big as he is nursing 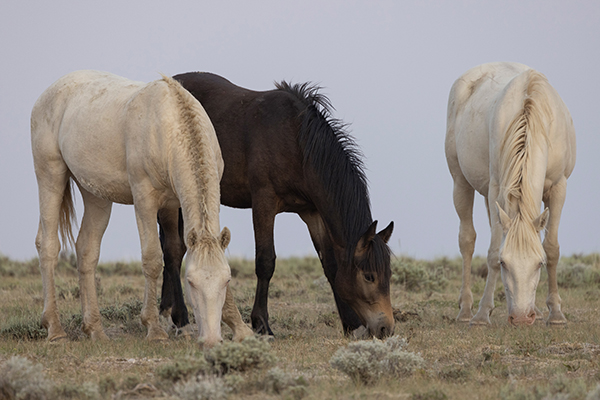 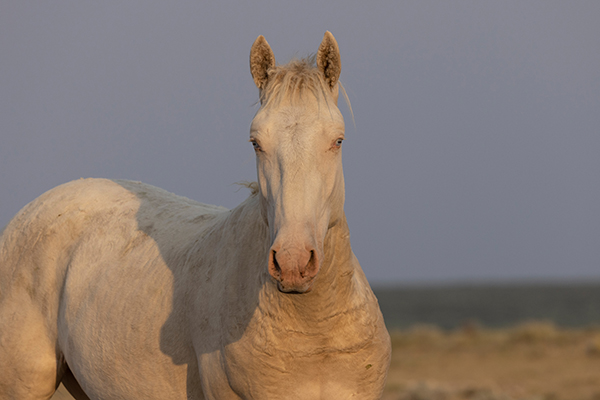 Julian in the dawn light 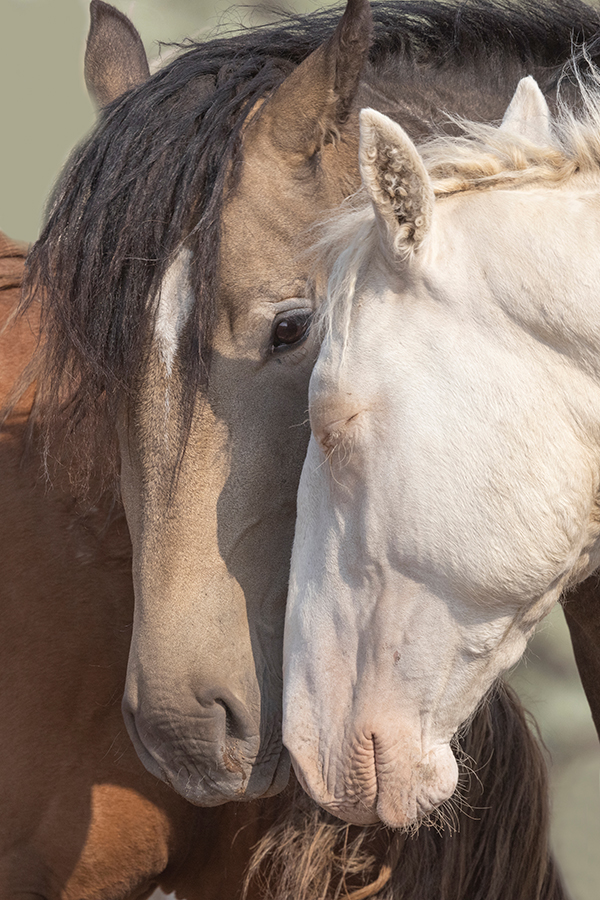 A tender moment with mom

When I heard that the Checkerboard roundup had been scheduled for the winter and Salt Wells Creek was one of the targeted herds, I hoped that their family would not be captured. Since we were not allowed access to the holding facilities that the horses were being shipped to, Wheatland and Rock Springs, unless I was there the day they were being captured and was lucky enough to see them, I would not know what had happened to them.

When I saw a photo of Julian on Facebook I felt my hope soaring. There was a chance that he and his family were still free. I did not see them in May but in June I saw Julian’s family without him and his brother – they had been kicked out of the family. 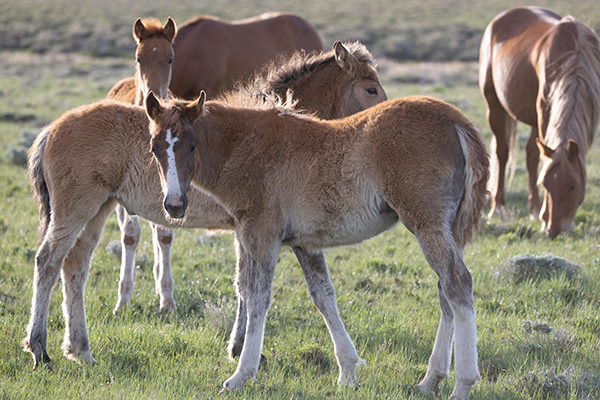 In July I was back at the waterhole where I used to see Julian with his family, and Julian was on his way there! I was so excited to see him again. 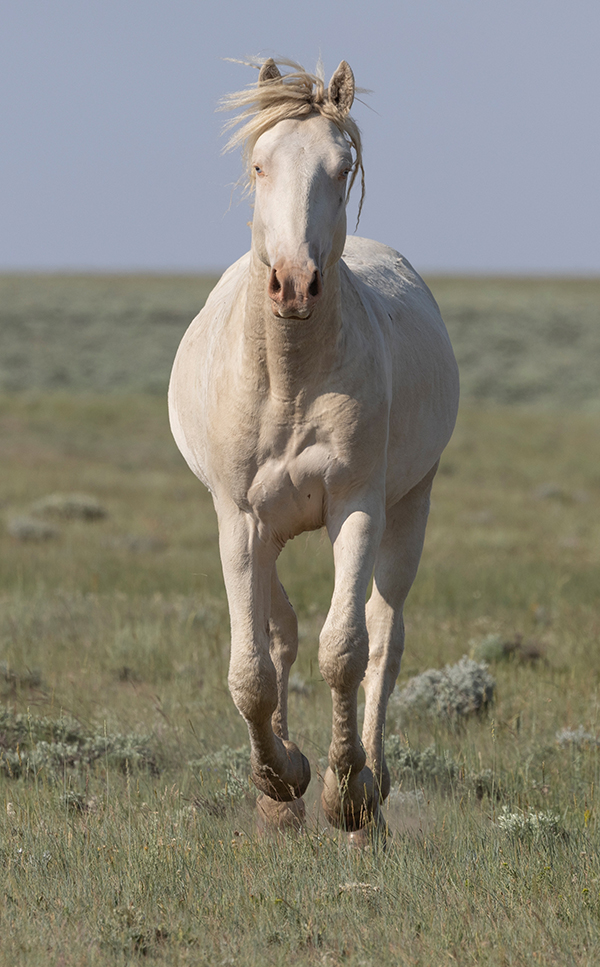 Julian on his way to the waterhole

Curlies who are more “extreme” tend to have not much of a tail and lose their coats in the summer – Julian fit this bill. 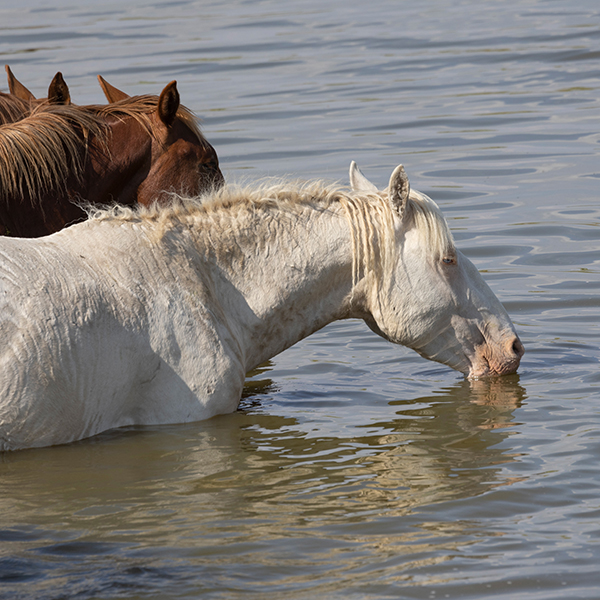 In the waterhole with other bachelors 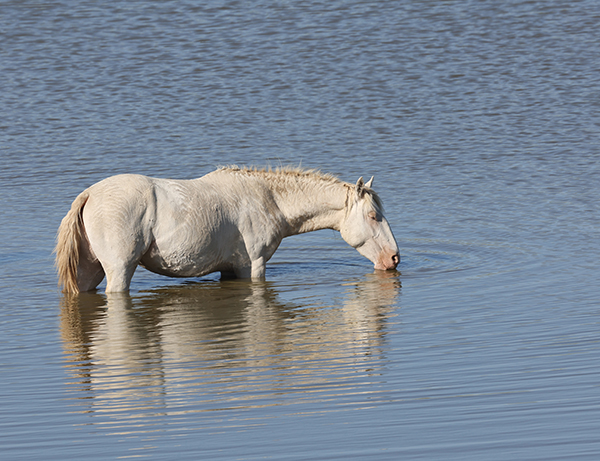 A quiet moment at the waterhole 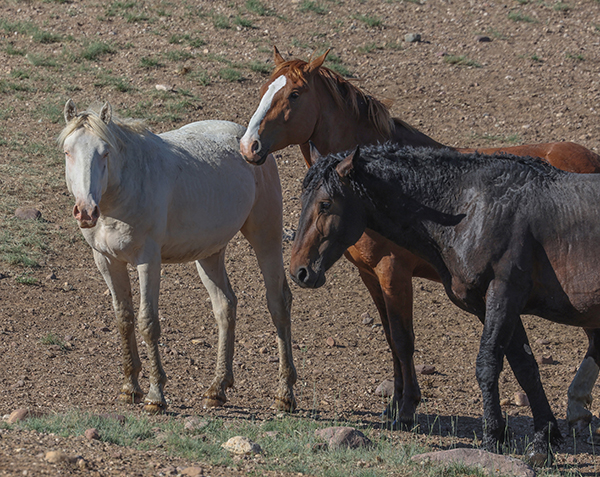 I was happy to see he was not alone and had joined some of the bachelors.

His family with the new foals 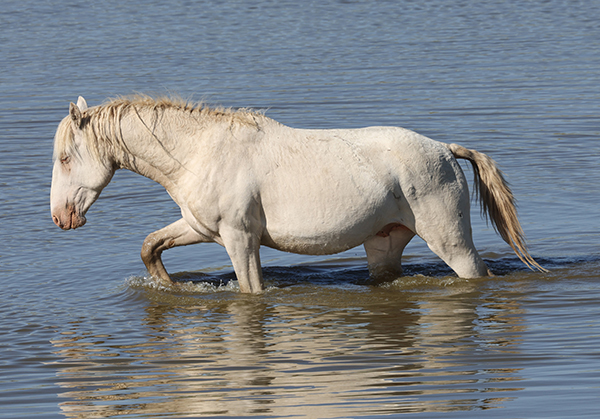 Julian walking out of the waterhole

It is a joy to be able to follow horses who I have spent time with and grown to love and watch them flourish in their homes. Julian and his family were some of the few horses in Salt Wells Creek who were lucky enough to evade the helicopters in the Salt Wells Creek roundup in 2021. But this herd is targeted to be zeroed out – and I want to see Julian grow up to be a band stallion with his own family.

Follow me on my blog at http://www.WildHoofbeats.com to see how you can help when the Bureau of Land Management moves forward with their Resource Management Plan. 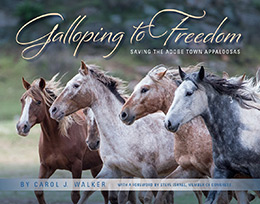 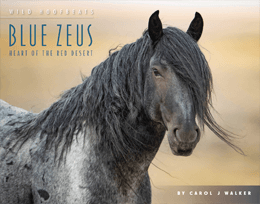 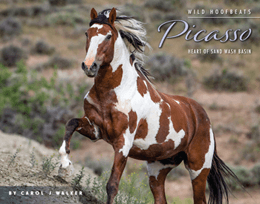 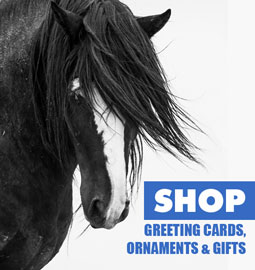 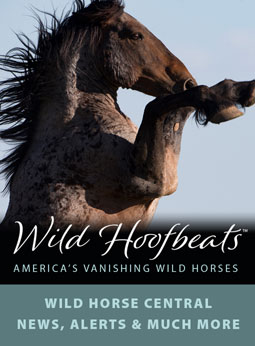 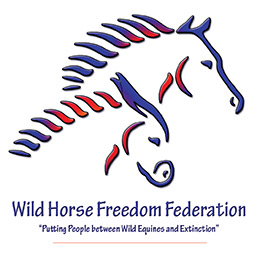